The Ghost Trailers(after the memory was rewritten)

The Ghost Trailers(before the memory was rewritten)

His Aspect , His father's sword ,Lancelot.

Episode 1
Tsuganashi Aiba (相羽 十 Aiba Tsuganashi) is a member of the Wizard Brace and the olde brother of Mui Aiba who had his memories modified and worked as a member of Ghost Trailer until the modified memories were erased shortly before the start of the series.

He is voice by Toshiyuki Morikawa (un-confirmed).

Tsuganashi has neck-length black hair (In the manga initially shorter but it began to grow later on) that has bangs that covering the right side of his face, pale blue eyes. He has average height and weight but in the manga appears more slim and somewhat curvaceous.

Occasionally, he wears a dark blue knee-length coat which seems to be the formal uniform of Wizard Brace, the community he is participates in.

Tsuganashi appears to be a cold and careless person and (somewhat sadistic in the manga), as evident when attacking Mui Aiba, completely disregarding ever being related to her due to the memory loss. He's quick to attack, and doesn't seem to care about his victims. However, he is shown to have somewhat of a heart and untrue to his real emotions as evident in the ice castle, when Mui mentions how much she's missed him, but he's unable to accept these feelings and was quick in an attempt to finish her off. He was also revealed to have been more pleasant person in the past.

After having his memories return, he became a more gentle person who cares deeply for Mui. He is also protective of his little sister as he became enraged when Ena Kisaki (Tsuganashi's ex-girlfriend) claimed that Takeshi Nanase was Mui's boyfriend.

Tsuganashi is the first child, and first son, of the Aiba family, and like his parents born a magician, making him a pureblooded wizard. A few years after him his younger sister, Mui Aiba, was born. The two were always close growing up, like practicing magic together, along with Mui giving him a white glove that became his Aspect. At some point, in an unknown order, one or both of his parents died. He started carrying around a sword of his father's he named Lancelot, and joined Wizard Brace. In more recent times he was captured and brainwashed, and in pursuit of her ended up causing Mui to meeting Takeshi Nanase, and beginning the series of events that is the series.

Tsuganashi was first seen with Hotaru Kumagai, Takao Oigami and Ushiwaka. He was formerly a member of Wizard Brace, the community which viewed the Ghost Trailer as the greatest enemy, so is detested as a traitor amongst them.

However, later he was used as a hostage exchange for both Hotaru Kumagai and Takao Oigami but his previous memories had still not returned as yet, so he fought Takeshi Nanase, Mui Aiba and Kazumi Ida once against, but this time they fought him prepared as Mui would later shoot him with a special bullet that seals magic, thus canceling the previous mind rewritten spell and in-turn making him the old Tsuganashi once again.

Evil Ice: The ability to allow him to manipulate ice and freeze objects. It also can be use to create objects made of ice

Glove: A simple left handed white glove given to him by his sister.

Lancelot: Though not his Aspect, Tsuganashi also carries a saber he named Lancelot that he has shown channeling his magic through. It's a memento of his late father.

Tsuganashi's little sister. They have been very close for a long time, even his Aspect came from her. After being captured and brainwashed by Ghost Trailer, Tsuganashi became very cold and violent towards Mui. But after being freed from the brainwashing and returning to Wizard Brace the two have shown a to have a good relationship, though at times Tsuganashi teases Mui (simple sibling relationship). Mui has also shown a bit of a brother complex, though mainly when he is with his ex-girlfriend, though any specific reason for this hasn't been mentioned (There could be a backstory to it like Kisaki teases Mui unknown to Tsuganashi, Kisaki lies to Tsuganashi about Mui just to get Mui in trouble or Mui thinks her elder brother will stop paying attention to her [the classic reason])

Tsuganashi's ex-girlfriend. In the last episode Kisaki gave shelter and protection to Tsuganashi, Mui,Takeshi and Ida. She and Tsuganashi seem to be close to the point Mui doesn't like it.

Tsuganashi met Takeshi met shortly after her. The two were first on bad terms as he kept attacking and hurting his sister, though this was because his memories were altered by Ghost Trailer. After Mui fixes his altered memories the two are now on friendly terms with each other. But Tsuganashi can be a little hostile towards him due to Mui liking Takeshi. This is best shown when Kisaki calls (obviously lying) Takeshi was Mui's boyfriend and Tsuganashi immediately reacted angrily towards him telling him that he better not be.

A comrade of Tsuganashi when he was at Ghost Trailers . They both are quite friendly together but nothing special.

A comrade of Tsuganashi when he was at Ghost Trailers . They both are quite friendly together but nothing special.

A comrade of Tsuganashi when he was at Ghost Trailers .They both are quite friendly together but nothing special. 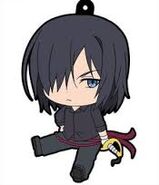 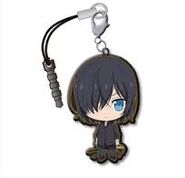 Character design of Tsuganashi
Add a photo to this gallery

Retrieved from "https://magical-warfare.fandom.com/wiki/Tsuganashi_Aiba?oldid=7870"
Community content is available under CC-BY-SA unless otherwise noted.